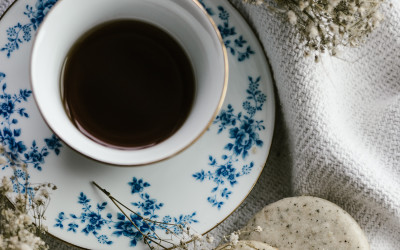 Our Black tea is a type of tea that is more oxidized than oolong, yellow, white and green teas. Black tea is generally stronger in flavour than other teas. All four types are made from leaves of the shrub Camellia sinensis.

Indian Assam Tea is harvested twice a year, there is a ‘first flush’ and a ‘second flush.’

The first flush is picked during late March. The second flush is harvested later, this is the more sought after tippy tea, named because of the gold tips that appear on the leaves. This second flush, tippy tea, is sweeter and more full-bodied and is generally considered superior to the first flush tea, one of my favourites! The leaves of the Assam Tea bush are a dark green with a glossy look and are fairly wide compared to those of the Chinese tea plant.

Indian Darjeeling Tea - Another one of my favouries and one of the finest teas to leave India, in many people’s opinion, Darjeeling First Flush is made from the first ‘flushing’ or growth of the tea bush, which occurs usually between early March and mid April and is the first growth of new shoots, after the plant has laid dormant for a couple of months. It is a lovely light, very palatable, almost heavenly and nector like in flavour! First, flush teas are highly sought after and are very expensive, but worth every penny! Our Darjeeling Tea comes from the Thurbo Tea Estate which, we are sure you’ll agree, is simply exquisite and decedent.

Ceylon Tea - This fine leaf Ceylon tea (pekoe fannings) is widely used in blends to provide character and punch! It is a light and bright Tea that is rich in flavour. I love this fabulous tea.

Ceylon Teas were widely used in many British blends however today they are used far less widely due to their high price. The reason for Ceylon Teas high price is because of the extremely high minimum wage system and Fairtrade that operates in Sri Lanka, where tea-pickers will earn as much as Junior Civil Servants.

Rwanda Tea - The quality of the tea grown in Rwanda is among the best in the world and our Rwandan Teas are have an amazing, distinct taste. Our Rwanda Tea is purchased from the Gisovu Tea estate.

Rwanda has a population circa 12 million and it is known for its beautiful, vibrant, mountainous landscapes. Living and farming in Rwanda (90% of the population are engaged mainly in subsistence agriculture) it is not easy however the small-holder model suits the production of coffee and tea.

Kenyan Tea - Kenyan Tea is vibrant, strong and flavourful and is widely used in many of the popular Tea brands. Our Kenya Pekoe Fannings Tea is sourced from East of the Rift KTDA Tea Estate which is regarded as producing the best pure indigenous tea from Kenya (Pure Kenya Tea). We love Kenyan Tea!

Rooibos Tea - This caffeine-free Tea is regarded as a healthy drink and does not look like our traditional teas! The leaves of the Aspalathus Linearis are oxidized which produces its distinctive flavour and gives the appealing reddish-brown colour. Rooibos is NOT tea (Camellia Sinensis), rather Aspalathus Linearis, which is a member of the legume family.

Where it tends to be from

The Heath & Wellbeing Benefits of Tea

Black tea offers a variety of wellbeing benefits and has been found to reduce colds and flu's.

Herbs and flavours found in Tea have been found to improve concentration and alertness.

A Delicate, smooth, slightly smokey Breakfast Brew that will get your day off to an Amazing start! A bright large leafed Tea that keeps on giving!

Our Earl Grey Tea contains Black Tea from Asia & is flavoured with oil from the rind of bergamot orange, a fruit mostly grown in Italy.

Our Russian Caravan Tea is certainly Cheeky in taste and flavour and is typically a blend of Oolong tea (semi-fermented), Keemun (black) and Lapsang Souchong (smoked) tea.

A Fine Leaf Ceylon tea (Pekoe Fannings) which is light, bright, brisk and rich in flavour!

A Fabulous Tea suitable for anytime of the day!

Our delicate, decaffeinated Tea from Kenya with small even leaves (Pekoe Fannings) is a delightful tea that is a treat any time of the day.

An excellent all-day tea from the Gisovu Tea Estate in Rwanda that is high in quality and flavour.

Kenyan Tea is bright, strong and flavourful and is widely used in many of the highly advertised brands.